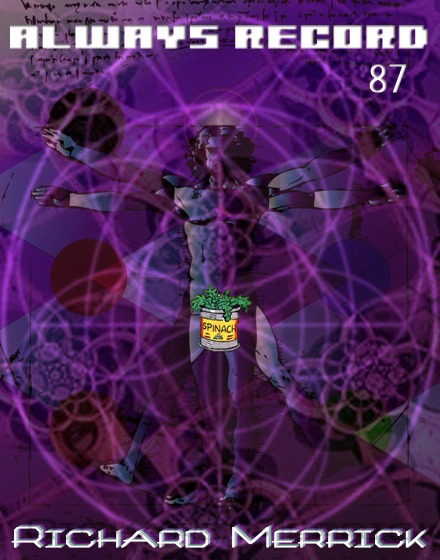 Richard Merrick -- Acoustical Engineer, Alternative Historian, & Author of The Venus Blueprint -- joins us on Always Record for a wide-ranging conversation. Topics include: Gaussian Interference Theory, the Acoustical Standing Wave Nature of Reality, Entheogens and the Roots of Western Civilization, the Transcendent Utility of Psychedelic Communion, Sacred Spaces & the Venus Transit, Green Man Archetypes, the Relationship Between Space-Time & Human Consciousness, as well as The Question on everyone’s mind: Was it really just spinach that granted Popeye his superhuman strength? More information on Richard and his work can be found at interferencetheory.com

(with Mark LeClair and Alex Fulton)

ten·sor ˈtensər,ˈtenˌsôr a mathematical object analogous to but more general than a vector, represented by an array of components that are functions of the coordinates of a space.

We'll All Be Magick Supermen

Why did the Beatle cross the Abbey Road? Patrick Sevc of Overlaphotel.blogspot.com joins Always Record for a conversation about what's left after copyright and the farside of sync film.

John Maguire (jmag0904.wordpress.com) joins AR as Alan departs for a few weeks. Topics stem from last week's show and include: Rosemary's Baby and Manson via Beach Boys and Beatles, Sirius and...

Welcome to the Enigma Machine

(with Scott Onstott and Marty Leeds)

Scott Onstott (secretsinplainsight.com) and Marty Leeds (martyleeds33.com) join Alan and David to dive deep into the thinking of these two masters of number, letter, and sacred geometry. Only...

Who Is The Master Who Makes The Grassy Knoll Green? Adam Gorightly of adamgorightly.com schools us on MKUltra, Kerry Thornley, JFK, Discordianism and the CIA. "This has always been a working...

Video Projection Artist Michael Allen (project-ions.com) puts David and Alan into his Montauk chair and blasts awesomeness at their brains.

A Swami and a Mason walk into AR

Conversation around the new SyncBookPress title The Yogic Gospel of Thomas includes various mystery schools, the origins of Christianity, control of religions and control by religions, and...

The Fearful Symmetry of Syzygy Stardust

Matt Pulver of 2001.a-false-flag-odyssey.com joins David and Alan to talk about the Bow-Man in the Mirror and Set "R" (Russell's Paradox).

Alan and David join PsoNik Aitchison, Steve and PhiChick, Swami Shivananda Giri, and Thomas Sheridan of Type1Radio (type1radio.blogspot.co.uk) to talk about Ghostbusters, NY/OZ, and the King's...

Friend of the Devil