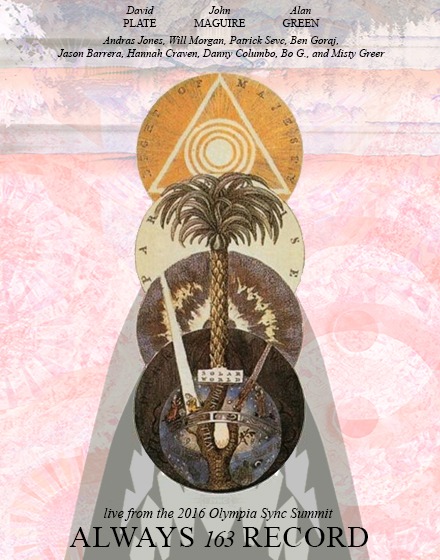 The Act of Killing

John and Alan discuss The Act of Killing, a 2012 documentary about the individuals who participated in the Indonesian killings of 1965-66, directed by Joshua Oppenheimer.

Recorded live at Obsidian on Saturday August 20th, as part of the 2016 Olympia Sync Summit, after a screening of David Plate's "Jack of Hearts" film (click the link below to watch the full film...

(with Gordon White of Rune Soup)

Gordon White of RuneSoup.com joins Bill, David and Alan for a conversation that runs the gamut from Magical Thinking to UFOs, from Pokemon to Trump, from Archons to Animism.

Bill Klaus, David Plate and Alan Green reconnect in an episode that will lead right into AR161

Be Your Own Cow

Your first step should be to watch Wally Scharold's presentation on the 1997 film CONTACT, the video of which we just released and is linked below. Then you can listen to this Always Record, which...

Variations on a Theme

Christopher Knowles returns to Always Record for a conversation that circles the satellite topics in orbit around the Secret Sun. Such nodes include the Stairway to Sirius, David Bowie, Meta...

Frank Zero joins John Maguire and Alan Green to talk about John Lilly, ECCO, and the VR nightmare of World on a Wire. Plus: Trauma-based mind control, robotic warfare, the human bio-computer,...

Choose Your Own Adventure

Alan once again asks about the future of Sync Book, this time towards the end of our members hangout call. Huge thanks to our members for being so cool and so inspirational.

Off the Scale of One to Ten

Alan and Andras check in on the 2016 Sync Summit Project, pose a question about the future of Sync Book Radio to the Pop Oracle and turn the dial all the way up to blue. Or maybe it's off the...

(with Andras Jones and Will Morgan)

Take a look at the Lawman Beating up the wrong guy Oh man! Wonder if he'll ever know He's in the best selling show