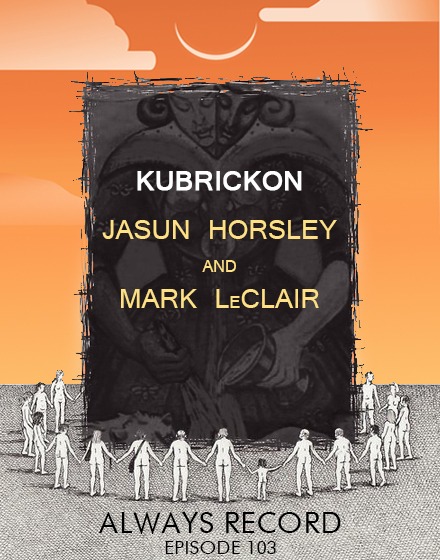 High alchemy! We bring together JaSun Horsley and Mark Moon in the middle LeClair. "One way or another, Kubrick films generate obsession. As Room 237 amply illustrates, they act like Rorschach blots that receive viewers' projections and reflect their fantasies back at them. My view is that they are able to do this because, like Rorschach blots, they are empty of meaning. Kubrick films are enticing to intellects because they are like puzzles, games. They demand participation. The viewer must put his or her soul (psyche) into the movies because Kubrick has left his own out. What makes Kubrick’s films fascinating is that they create cognitive dissonance. The skill and the precision of the lighting, set design, camerawork, and composition is juxtaposed with the barrenness of human emotion and of dramatic coherence, the often unnatural acting and stilted dialogue, and the fragmented and oddly lackluster storytelling. The mechanics of melodrama have broken down. There is no center to hold. This mysteriously missing center—the incoherence of Kubrick’s films—creates fascination in many viewers (especially the more intellectual ones) and a burning desire to somehow find that missing center, to crack the code and relieve the tension of not-knowing." From Kubrickon: Stanley Kubrick & the Architecture of Immersion, a work-in-progress by Jasun Horsley, due in 2015

After our 420 Members Hangout, we reconnected with some of the folks who accidentally got locked out of the original call. An amazing conversation ensued. Participants include SJ Anderson, Wally...

(with Misty Greer and Patrick Sevc)

Misty Greer and Patrick Sevc join John and Alan for a playful late night chat. (We forgot that you're not supposed to feed Mogwai after midnight.)

Musician and synchromystic Kevin Halcott joins David & John to discuss Thelema, neo-shamanism, and synchronistic wanderlust. Other topics of conversation include: Crowley, codification of...

In this late night conversation we Restate our assumptions, Qualify our terms and statements, Chase our intellectual tails, and Reconsider our foolish notions. Topics include: Jim Carrey's...

Kira Young (host of The Bridge and co-host of The Moon Lodge) joins John, David, and Alan in the Always Record roundtable. The conversation begins with distinctions between archetypes, tropes,...

Lyon the Witch and the War-Room

Guillaume Samard gives Alan and David an update on what French life is like post-Charlie Hebdo. The conversation turns to propaganda and media fakery, Anchorman 2, practical mysticism, every...

Alan and Bill share a sloppy late night conversation. "At midnight, all the agents and superhuman crew go out and round up everyone who knows more than they do."

Back to the Garden

Loving the Alien or Jung Lust for the Anima Other

Satellite comes and goes, We give each other all we know, In silence we still talk, By the light of the stereo waltz, Watching them come and go, The templars and the saracens, They're traveling...

John and Alan travel through time to pat ourselves on the monkey on our backs. Then the Ghost of Christmas Past takes us Way Back when David Plate joins the call. Topics: Synchromysticism as...

John and Alan discuss our modern world Hunger Games: a game where we try to figure out if we are Consuming Media or if Media is Consuming us.

(with Jasun Horsley and Mark LeClair)

High alchemy! We bring together JaSun Horsley and Mark Moon in the middle LeClair. "One way or another, Kubrick films generate obsession. As Room 237 amply illustrates, they act like Rorschach...

Keir Dullea and Gary Lockwood at the Astor Theatre

Nicholas Ulbrick was lucky enough to attend a special presentation of 2001ASO where Keir Dullea and Gary Lockwood were in attendance. We are now lucky enough to have Nicholas share the audio of...

In this special visit from F. David Peat, we learn about his years working with David Bohm, Room 137, Carl Jung, Wolfgang Pauli, Dialogue Groups, Archetypes, and the Science behind Synchronicity....

It's an Always Record reunion! Starting with a quick look back on getting to 100 episodes, we then get into: spiders and webs (both technological and Maya), Paul is Dead, Wilhelm Reich, Chaos...

Robert Steele Activist, Spy and Author talks to John and Alan about his book "Open Source Everything Manifesto", his former employers at the CIA, and topics ranging from NeoCons and NeoNazis to...